When Big Sister Chelsie E. Niecko was named Mentor of the Year by HandsOn Battle Creek, she was “shocked because I don’t feel like I really did anything. I do what most people do.” 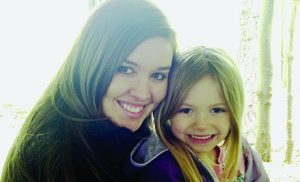 Nikeesha Settles, Big Brothers Big Sisters neighborhood service delivery specialist, sees it differently. “Chelsie’s Little Sister Desarae has been through many changes in the last year and Chelsie has been there through it all,” Settles says. “Chelsie encourages her and attends her school functions. She is that one consistent adult in her life.”

Niecko was persistent in keeping a consistent relationship with Desarae, who is now 6, even as the girl moved several times and was placed in the care of several different adults. Early in their match, Desarae was moved and the two lost touch. During this time, Niecko used every resource she could think of to find Desarae. Six weeks later, Big and Little were reunited. “I was ecstatic when we regained contact,” Niecko says.

“Chelsie not only helped Desarae feel special during this time, she also was very instrumental in helping me keep up with a family that could have been lost in the system,” Settles says. “Chelsie went above and beyond.”

The relationship that Niecko formed with Desarae has helped instill greater confidence in the little girl, Settles says. “When I first met Desarae, she was very quiet and to herself. Since being matched with Chelsie, her confidence has grown and she has become a very outgoing 6 year old.”

Having a temporary relationship with her Little never entered Niecko’s mind. “Before becoming a Big, I looked at my lifestyle to make sure I could keep up with the relationship,” the Western Michigan University psychology graduate says. “I knew if I didn’t do this, there would be a brokenhearted kid at the other end.”

Niecko’s approach is working with Desarae who says the best part of having a Big Sister is, “I get to go with her a lot.”

The pair has had their share of big outings such as going to the zoo but casual get togethers such as hanging around Niecko’s house and playing with her dogs or planting flowers are more the norm for the pair. Often the two paint their nails and do Desarae’s hair. Small moments like this have had a big impact on Desarae who told Settles, “I didn’t know I was pretty until my Big Sister told me.”

“My favorite part of being a Big Sister is just being with her,” Niecko says. “Honestly, Desarae makes it so easy to be a Big Sister. Being around her is just like being with a niece; it just feels like I’m with family.”