Huntington National Bank’s Terry Dorgan has been long-impressed with the charitable giving of his employer and wondered how that involvement could be encouraged at the local level.

“Huntington is very involved in community activities, and I was thinking, ‘How can we get our colleagues more involved?’ ” Dorgan says. “We all know that non-profits have challenges but I think the bigger issue is that you need people to volunteer and get involved. Writing a check doesn’t always solve the problem.” 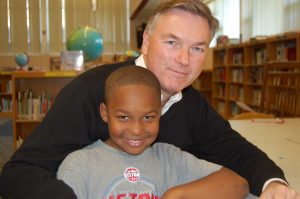 So Dorgan brought the Bigs in Business program to Huntington National Bank in Kalamazoo last year and challenged his coworkers to get involved. “I told them, ‘We can show kids a view of the world that is outside what they normally see,’” Dorgan says. “‘We can show and encourage them that there is light on the other side.’ ”

His coworkers not only accepted but embraced his challenge. During the first year of the program, seven Huntington National Bank employees served as Bigs. This year, 10 children will benefit from having a Huntington Big mentor them. This has been accomplished by not only engaging current employees but also new staff members. As Huntington National Bank’s community president, Southwest Michigan, Dorgan gets employees involved early in the interview process by explaining the bank’s culture and its commitment to the community.

Huntington’s involvement with Big Brothers Big Sisters is supported not only by Dorgan and his local coworkers but by the bank on a regional level. The bank has been a financial supporter of the agency for some time and encouraging employee volunteerism is all a part of their plan. “When we get involved with an organization, we like to wrap our hands around the whole sponsorship, not just write a check,” says Karen Hale, assistant vice president/senior marketing specialist for Huntington.

The bank has seen a positive return on their investment, Hale says. The Bigs in Business program is an excellent team building experience for their colleagues and leads to better engaged employees. “When the colleagues are engaged with the organizations we support, they are proud of our involvement,” Hale says. “It’s a package deal.”

Dorgan acknowledges that it can be a challenge to find the extra time for mentoring but encourages others that it is easier than you think, it is as simple as taking a  lunch hour with a Little. “It can be tough to find the time but I can give up lunch once a week,” he says.

Being a Big Brother to and finding time for 8-year-old Keivon is paying its own rewards to Dorgan. “As I was leaving the last time I saw Keivon, he gave me a hug. How do you replace that? You don’t pay for that. I know I am impacting his life.”