On a sunny fall afternoon, two friends kick a soccer ball around, stopping occasionally to talk about what’s going on in their lives. It’s the type of scene you expect to see on a playground except the friends are separated in age by decades. 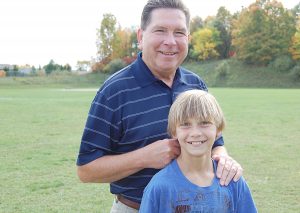 Bob Mercer and his Little Brother, Jayden, have been friends since they were matched when Jayden was in the first grade. Now, as a fifth grader, Jayden looks to Mercer as more than a friend. Their bond is so tight, Jayden says, “It’s like having a real brother.”

This bond, developed over basketball, ping pong and homework, helped Jayden get through a very difficult time in his young life: the death of his father. “At the time, he seemed very casual about it,” Mercer says, “but I know it went a lot deeper than that. I know he had counseling and that wasn’t my role.”

What Mercer could do for Jayden was to be a consistent presence in his life. “Jayden has a great mother,” Mercer says. “I wasn’t trying to fill that kind of role but I did become more cognizant in that he has a loss. It really tugs at your heartstrings.”

For his part, Jayden speaks highly of Mercer. “It makes me happy when Bob comes to see me,” Jayden says. “He is nice and is easy to talk to.”

The match began through the Bigs in Schools program at Hasting’s Southeastern Elementary School. The relationship has evolved to become a “site-based plus” match, meaning the two mainly still see each other at Jayden’s school but Mercer is cleared to see his Little on weekends and during the summer.

This means that Jayden sometimes has another supporter cheering for him during his baseball games. Mercer, the purchasing/human resources manager for Hastings Fiberglass, attends Jayden’s Little League games when he can.

The time he invests in the relationship is time well spent according to Mercer and he encourages others to get involved with Big Brothers Big Sisters, personally and at Hastings Fiberglass. “If you can take just one hour out of your week, you can truly make a difference in a kid’s life,” Mercer says.

Mercer says he has seen a difference in Jayden since the beginning of their relationship. “I’ve seen him go from a typical kid who only cares about himself to being a polite kid who says please and thank you.

“He shows more respect,” Mercer says, “he thinks about me now.”

Jayden has expressed a desire to continue their relationship as he transitions into middle school next school year. And Mercer, knowing how their friendship has made a difference in both of their lives, is planning on being there for Jayden. “It’s been a very, very fulfilling ride for me,” Mercer says.