Every place I went with her, I’d never been there before.

—
Category: Be a Big/ Meet the Match

Former mentor’s influence compels current Big Sister to give back.

As a young girl, Alexia Jones didn’t have the opportunity to experience life outside of her neighborhood and, unfortunately, the local environment wasn’t positive. “I grew up in a neighborhood with lots of violence,” she says. “I never played outside.” 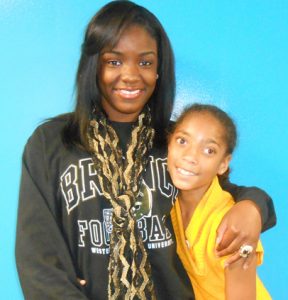 That began to change when she met her Big Sister Reina in fourth grade. “My friendship with Reina gave me something to look forward to,” Alexia says. “At least for a few hours, I didn’t need to think about the neighborhood violence.”

Alexia’s Big Sister did more than occasionally take her out of her neighborhood – Reina expanded her view of the world. “Every place I went with her, I’d never been there before,” Alexia says. The pair visited the beach, went to Western Michigan University football games (and met the team because a member of Reina’s family was a player) and gardened together. Through Reina, Alexia experienced a family life different from her own including sitting down for a family dinner for the first time.

Now, Alexia is paying Reina’s investment forward by being a Big Sister herself. “Reina is why I wanted to be a Big Sister,” Alexia says. “She really made a difference in my life and I want to give back.”

Alexia began mentoring Americas three years ago while she was a student at Kalamazoo Central High School and is continuing the relationship now that she has moved on to Western Michigan University. The former senior class president and current Kalamazoo Promise Scholarship recipient says, “I think it’s important to be a good role model. I want to show Americas that there is more to life than the violence she sees. I want to show her stability because I didn’t have that until I met Reina so I want to be that for her.”

In addition to stability, Alexia aims to show her Little Sister that homework is important. It seems to be working because Americas notes that, “she does homework with me and helps me read better.”

Doing homework with her Big Sister, of course, isn’t always at the top of Americas’ list about what she likes best about Alexia. When asked this, Americas says, “She’s nice and cute and so beautiful. She’s warm and fuzzy like a teddy bear.”

This sentiment seems to be alright with Alexia who says she wants to teach her Little Sister that “she can be smart and pretty at the same time.”

Catching Up With Emiliano and Tyler